Helicobacter pylori is gram negative bacteria discovered in 1982 by scientists Barry Marshall and Robin Warren. It was found in individuals with gastritis and gastric ulcers. These conditions previously were not linked to an infection because scientists believed no microbe could survive in the stomach’s acidic environment. It was a huge discovery. Most commonly it was thought these were conditions linked to stress and other issues. For the discovery Warren and Marshall were awarded the Nobel Prize. (1) It is estimated that 50% of the world is infected with this bacteria. (2)

A Case Study from the Literature

One study in the World Journal of Gastroenterology showed an association between H. pylori and alopecia areata. Alopecia areata is an autoimmune disease of the hair follicles. It presents with sudden loss of hair in one or more circular patches. It is also associated with other autoimmune diseases as well such as psoriasis. Below is an example of the disease.

In this study, a 43 year old man is presented with a case of alopecia areata. The man seeks the counsel of a dermatologist who prescribes 0.25% desoximetasone, a corticosteroid, and 5% minoxidil, commonly known as Rogaine. He was also given a SSRI for psychiatric support. There was no response to the medication other than the progression of the disease.

Due to a history of dyspepsia, indigestion, he was evaluated for the presence of H. pylori via urea breath test and H. pylori IgG antibodies which were positive. He was prescribed a protocol to eradicate the bacteria which included amoxicillin and clarithromycin, antibiotics. Pictures were taken every 2 weeks for 44 weeks and he was instructed to not take or use any of the medications in regard to the alopecia areata.  At week 6, a urea breath test confirmed the eradication of the bacteria. Below are the results. (3) 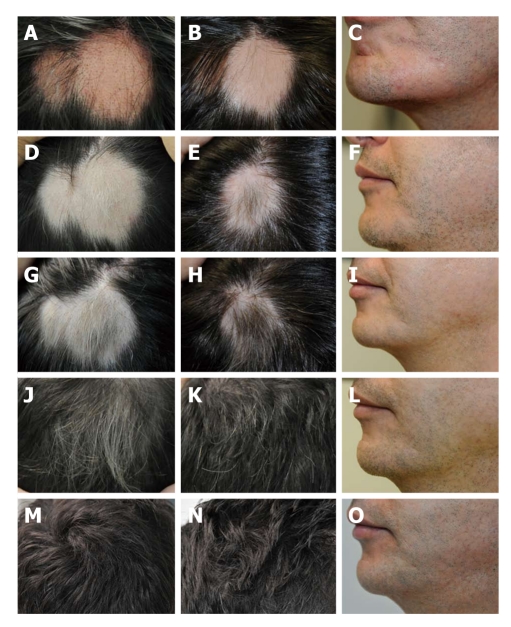 Here is direct quotation from the article itself, “H. pylori infection has been associated with numerous immune and non-immune disorders including dermatological conditions, such as chronic urticaria, rosacea, psoriasis, Schönlein-Henoch purpura, Behçet’s disease, prurigo nodularis, chronic cutaneous pruritus, progressive systemic sclerosis, Sjögren’s syndrome, and Sweet’s syndrome; many of them improving or going into remission after eradication of H. pylori infection.” (3) Like other autoimmune conditions, it is a hypervigilant immune system leading to cross-reaction or molecular mimicry.

With 50% of the world having this infection, it is very likely that H. pylori is a major player in the development of many of these conditions. Something I have seen with my own patients. But is it the sole cause? Absolutely not. That is what makes treating these diseases tricky. It is true that many of these diseases are different manifestations of the same problem however, the underlying problem can be caused by many different culprits. A skilled holistic practitioner is able to deduce which culprit or culprits are at cause. The underlying problem is gut health in most of these cases. They are often associated with increased intestinal permeability and dysbiosis.

Increased intestinal permeability or leaky gut allows macromolecules to get past our intestinal barrier and trigger the immune system. Dysbiosis is an imbalance in our gut microbiota. This leads to overgrowth of microbes, malabsorption, and many other problems. H. pylori infections reside in the stomach creating imbalance there. Environmental toxins such as pesticides and heavy metals cause inflammation and tissue damage. Certain foods can increase the likelihood of infection such as processed sugars and carbohydrates. We can be sensitive to other foods as well creating inflammation such as gluten and soy. Overwhelming emotional and mental stress can wreak havoc on our immune system and our body as well. I call these the Big 5.

Of course, our diet plays a bigger role too. We need to eat a nutrient dense diet full of organic, locally grown vegetables and fruits. Grass-fed and pasture-raised meat. Essentially a Paleo diet of sorts, depending on what foods you can handle. All these are important for good gut health.

What do we do for H. Pylori infections in the office?

Specifically, we do a series of evaluations including a thorough patient history. We want to know everything that is going on. Then a physical exam as well different modes of diagnostic testing. Once it has been figured out that there is an infection within the stomach we have a few avenues to go down. One, and this goes for all patients, is a change in diet as listed above. Secondly, we look for nutritional support that maybe needed to help the patient’s body heal. Lastly, we use a variety of herbs that are very good at supporting the body during infections.  A couple of herbs that are especially useful in helping to fight against H. pylori, Chinese Coptis and Morinda (Noni). They are very effective herbs. As holistic practitioners we also look at the entire body to make sure everything is working in harmony with each other.

Each part is essential for long lasting results. Without a proper diet the infection can return or make you more prone to other issues. Clean water, good quality food, and clean kitchen utensils are very helpful in protecting against further infection. Furthermore, strengthening your body through the lifestyle change and seeing your holistic practitioner on a regular basis will help prevent further problems and optimize health. That is why we often recommend coming back regularly at least twice per year for check ups and further support and care after the initial treatments are done. Of course, it depends on each and every individual. Some patients it may be once per year, others it may be more frequently. It all depends. Well I hope this helps and provides some much needed information!

Much like a car, we believe every part of the body needs to be in working order to function at peak performance. At Ozark Holistic Center, we want to make sure that all of you is functioning properly, allowing your body to be in peak condition.